Baldassare Forestiere was the ingenious creator and builder of a large maze of underground rooms and
passageways that he patterned after the ancient catacombs,and which can still be seen today in Fresno, California.
A young and naive Sicilian immigrant with no formal education, he came to America in the early 1900s to build a
citrus empire. Instead, he spent the next 40 years of his life carving out the useless farmland he had purchased for
such into a habitable underground oasis adorned with luscious fruit trees and grapevines that he planted
underground. He never intended to spend his life digging his way to success, but rather to free himself from the iron
rule of his father and prove that he was a worthy and capable businessman.

What did he do?

Starting in 1906 Baldassare Forestiere combined his knowledge of farming with his observations of the Roman
architecture of the Mediterranean to hand-excavate worthless farmland into a spectacular maze of underground
caverns. No dynamite was used, no plans were made; every idea originated in Forestiere’s head as he went. By
1923 he had carved out over 10 acres of connecting tunnels, rooms, patios, and grottos,as well as a simple earthen
home that sheltered him from the objectionable Fresno heat. Sadly, his premature death at the age of 67 was the
end to his dream of building a fantastic underground Mediterranean resort, which he had originally planned to cover
at least 20 acres. But what Forestiere left behind is an even greater legacy than he ever dreamed. In the words of
Lorraine Forestiere, the wife of Baldassare’s nephew Ric, it is a 21st century testament to “man’s simple capacity to
achieve with only the mind and body God has given us.”

Why did he do it? 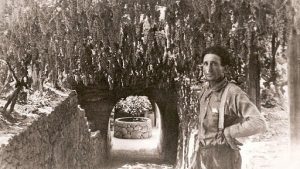 After a bitter argument with his father over the 22-year-old Baldassare’s future, Forestiere came to America to fulfill hisdreams of independence and good fortune as a fruit merchant, only to tragically discover that the California land hepurchased for growing citrus trees would be useless for such. To make matters worse, the staggering summer
temperatures of Fresno, which routinely reached 115 to 120 degrees, tormented him.

Forestiere desperately needed a way to escape the crushing summer heat. He remembered the coolness of the
underground cellars where he grew up and decided to excavate a cellar on his land where he could cool off during the
hottest parts of the day. It was so effective in giving him relief that he carved a few more rooms. Eventually he “moved in” and installed a small wood stove for cooking his meals and heating the cellar during the winter. While others in Fresno baked inside their stifling wood houses built above ground, Baldassare enjoyed the air-conditioned privacy of his novel underground hideaway.

Then Forestiere had an idea–could he get a tree to grow underground? He began to experiment. He built a planter
from the hardpan chunks he dug out and filled it with soil he reconditioned. A skylight was cut at the top of the
experimental room, and the tree then planted. He found that with the right amount of sunlight, water, and care, his
citrus tree would not only flourish, but would be protected from the frost.
How did he do it?

For the next 40 years, Forestiere labored in his spare time, chipping and carving away at the unforgiving earth. With
only his farmer’s tools—picks, shovels, wheelbarrows, and a scraper pulled by his two mules, Dolly and Molly—
Forestiere hand-carved in his spare time, a work unlike any this country had ever seen. He became enamored with a
revolutionary dream of a cool subterranean resort adorned with luscious fruit trees and vines growing underground; a place visitors could escape to during the crushing heat of the Fresno summers he found so unbearable. He often
worked at night by lantern to avoid the day’s heat, sometimes falling asleep at the very spot he was working on.
Forestiere once told a reporter in 1923 that the visions in his mind overwhelmed him. Today those who visit
Forestiere’s subterranean world are likewise overwhelmed by the “visions” of this humble Sicilian immigrant.